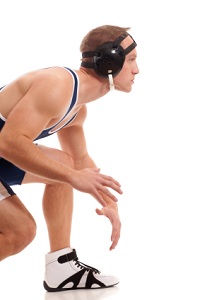 Submission wrestling is one of the oldest sports in the world. It is very different than professional wrestling and if you want to be good at it, you have to prepare yourself both mentally and physically.The best way to do this is to learn one of the martial arts which form the basis of submission wrestling. A few examples of these include Brazilian Jiu Jitsu, Catch Freestyle Wrestling, Judo and Sambo. There are many schools these days so you won’t have a hard time finding one.

As a beginner, your first few sessions will involve watching how others do it. There are also videos around which you can buy or watch online. In fact, some of the best fighters watch previous matches that they participated in or watch their fellow competitors so they can find a weak point that can be exploited during their next match.

Since you learn more by doing rather than watching, put theory into practice by sparring with another wrestler.

Keep in mind that people get hurt in submission wrestling even if it just a sparring session. One way to prevent that is to get yourself used to the idea of falling down or being held in a certain position. Although giving up is hard to accept, you must do this rather dislocating your joints.

In time, you will be able to improve your skills as a submission wrestler. You win some and you lose some. If you win, take it humbly and if you lose, treat it as a learning experience because even the best fighters have to face setbacks in order for them to become better.

One other thing you have to do to become a good submission wrestler is to stay in shape. This means exercising regularly, getting enough rest and eating properly. There are different weight categories in this sport and if you gained or lost a few pounds, you will be wrestling in another division which you may not yet be accustomed to.

A little coaching and the right attitude always make the best fighters. Some of these individuals who want to challenge themselves further can go beyond submission wrestling and join other competitions.

One of the most popular ones today is the UFC or Ultimate Fighting Championships where you get to compete against other fighters using the same or different submission wrestling styles to determine who the better fighter is.

Believe it or not, some of the best submission wrestlers out there didn’t know anything about this sport or any other martial art when they first started. They just got better after learning the technique by watching how others do it and through trial and error.

So what are you waiting for? Look for a local wrestling program in your area. Anyone can learn this sport, it doesn’t matter how old you are or your gender. The important thing is that you are willing to learn the principles that make submission wrestling work.